* Chao Embroidery, the art of needlework originally from China’s Chaozhou that was used in making gowns, dates back to the Tang Dynasty.

* Most wedding dresses in the world come from China.

GUANGZHOU/NEW YORK, Aug. 13– It is said that every girl has a wedding dress dream, but that dream of American girls is under threat as tariffs cast a pall on the wedding dress industry that relies heavily on the skills of Chinese embroiderers.

Most wedding dresses in the world come from China, especially high-end hand-sewn wedding gowns. Additional tariffs on Chinese exports will put U.S. retailers under financial stress, and drive the prices of quality wedding dresses even higher for American brides. 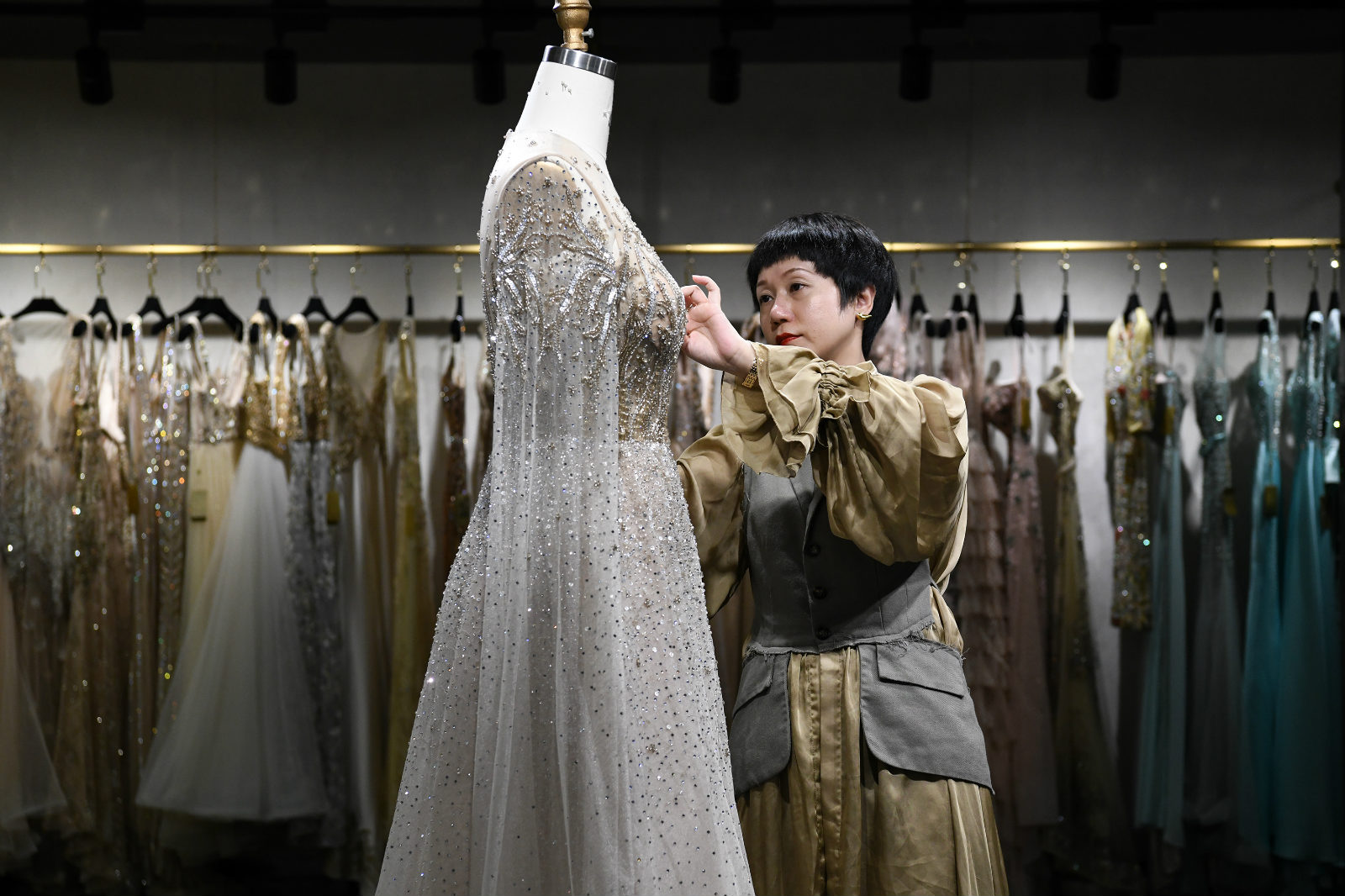 She Keyan, the official heir to the national heritage of Chao Embroidery, settles a wedding dress for display at a showroom for her personal brands in Chaozhou, south China’s Guangdong Province, July 17, 2019. (Xinhua/Liang Xu)

“We love to produce our top product in the United States, but we can’t find qualified staff,” Lang said.

Some luxury wedding dresses have as many as 100,000 hand-sewn beads and crystals. Making these dresses is a daunting task that only extremely hardworking and skilled sewers can accomplish.

“Have you ever met any American who grew up in college and wound up sitting behind a sewing machine? (It is) Not gonna happen. People here do not want to be sewers,” Lang added.

Wei Jingming, 48, and her cousin are sewing glittering paillettes onto a piece of silky cloth, while her daughter-in-law is juggling with threads of 20 different colors to embroider lifelike three-dimensional roses.

Most women in Tahou are sitting outdoors, busy doing needlework as the sun sets at the idyllic village of south China’s Chaozhou. Wei, like other villagers, is sewing for wedding dress exporters. Someday somewhere in the United States, a bride will proudly wear Wei’s work in her wedding.

Almost every family in Chaozhou has a skilled sewer, who spends her free time doing fine embroidery for wedding dress makers. For decades, manufacturers have been pooling their talents by assigning parts of wedding dresses to different families. 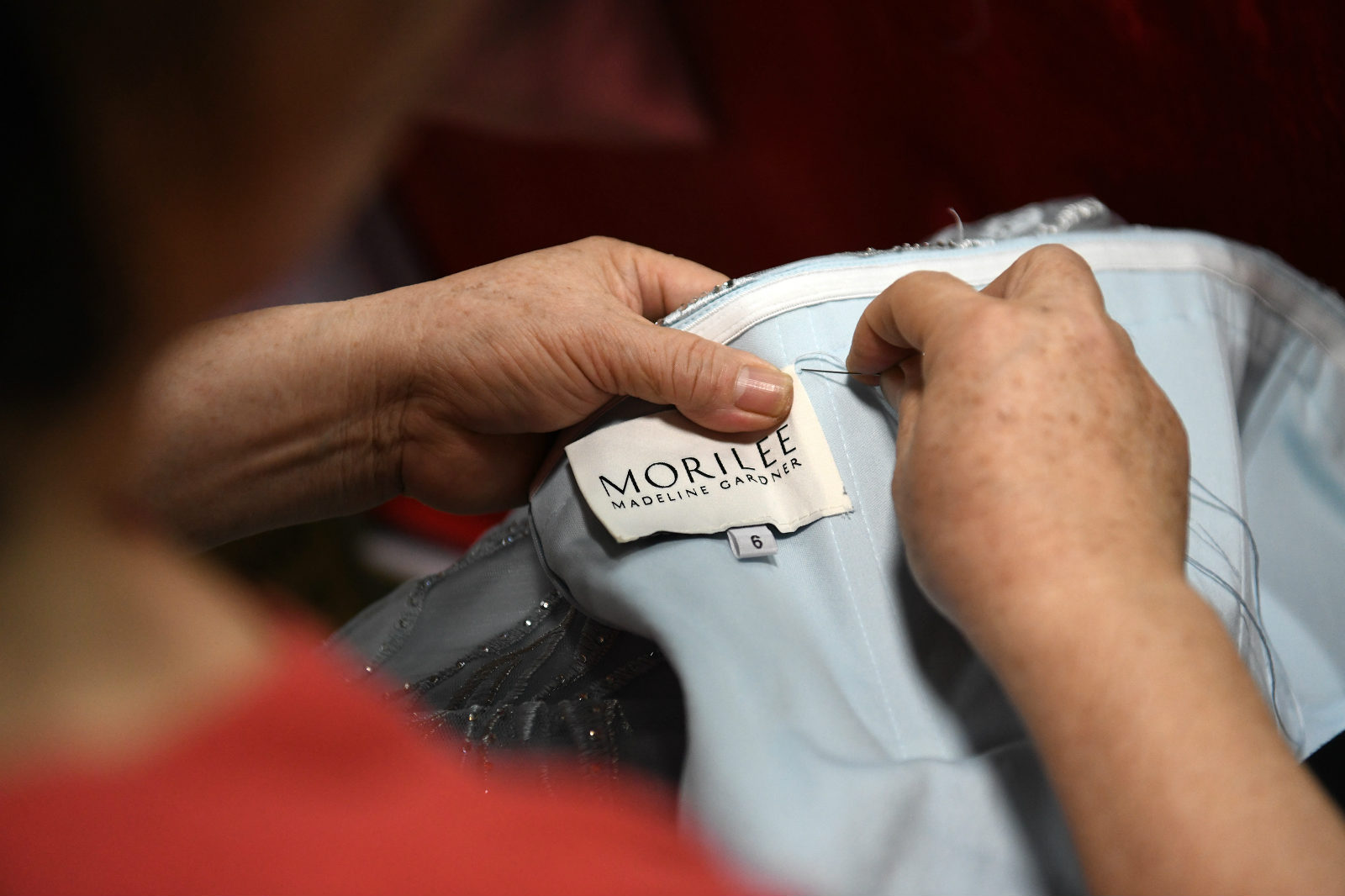 An embroiderer sews a brand label onto a Morilee dress at a factory in Chaozhou, south China’s Guangdong Province, July 16, 2019. (Xinhua/Liang Xu)

More than 200,000 people work for 800 wedding dress manufacturers in Chaozhou, a place with so many skilled embroiderers which is hard to come by. The embroiderers are the main reason why China is the world’s top wedding dress exporter.

“If we move our factories outside China, American brides would have to wear white blouses for their wedding,” said Yu Yuanyu, head of the Chaozhou Wedding Dress Industry Association.

Behind the incredible pool of sewing talents in Chaozhou lies people’s undying passion for embroidery.

Needlework is the second personality for a girl in Chaozhou. In local tradition, a girl makes her own wedding dress so that her future husband and guests to the wedding can see her talent and character from what she wears on the big day.

Wearing a silk robe, Master She Keyan sits tall at her sewing table, fingers flying between threads. She is the official heir to the national heritage of Chao Embroidery, the art of needlework in Chaozhou.

A tradition that dates back to the Tang Dynasty, the Chao Embroidery has evolved for over a thousand years, developing a system of more than 200 hand sewing stitches, which come in handy in making complex and extravagant dresses like prom and wedding gowns.

Like Wei and many other embroiderers in Chaozhou, She learnt sewing from her mother. In a workshop named after her mother Master Kang Huifang, she leads some 40 seasoned embroiderers in making luxury wedding dresses for renowned brands such as Allure, Blush, Morilee and Alyce Designs.

From this traditional three-storey building in Chaozhou’s old town, came some of the world’s most luxurious modern wedding dresses that went on display in shop windows along Paris’ Champs-Elysees and New York’s 5th avenue. 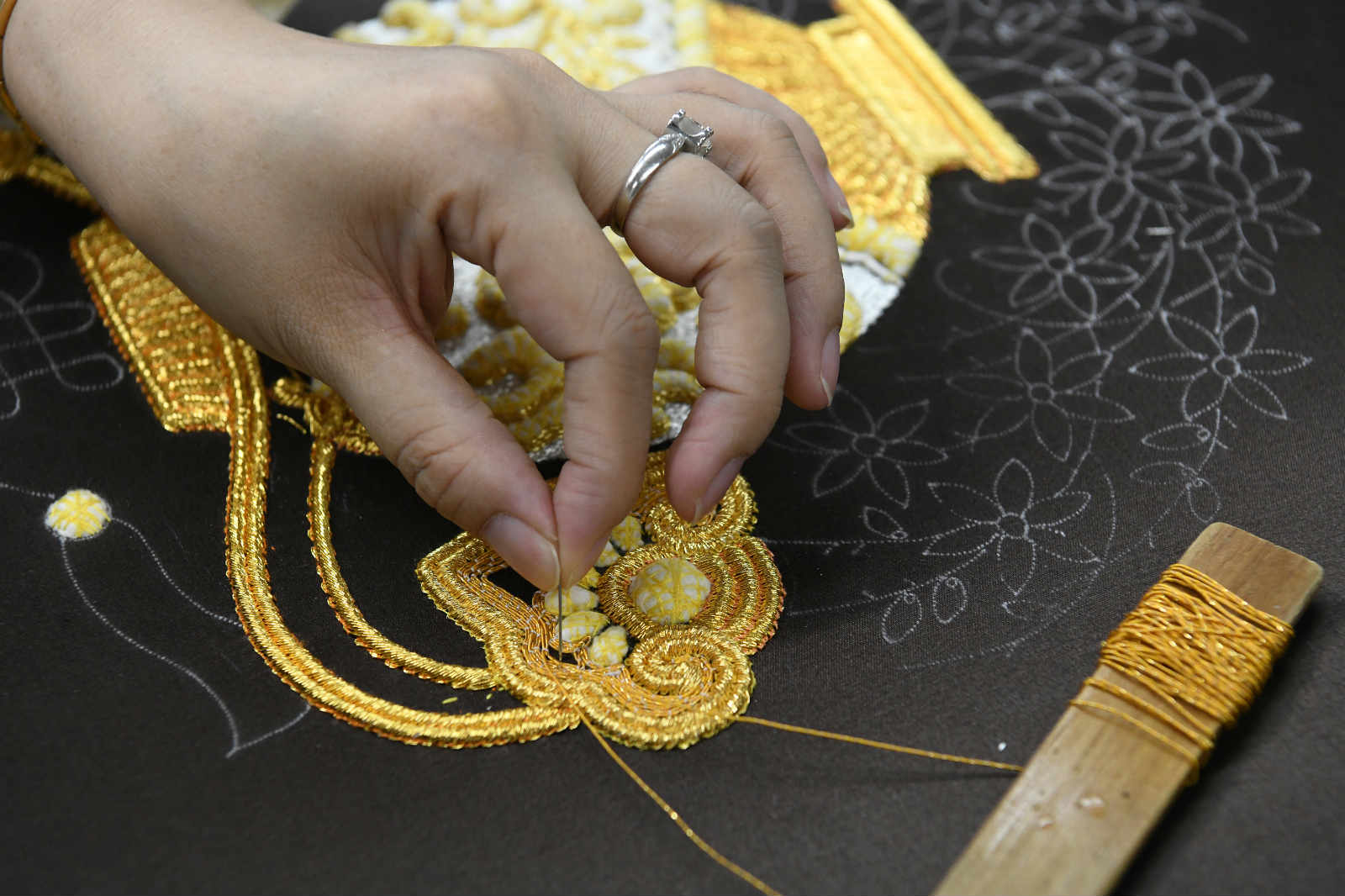 When making wedding gowns, one cannot sweat and the room has to be clean, lest the delicate fabric gets stained. The master looks effortless as she stitches elegantly in her cozy, air-conditioned workshop, but in fact, she often has to toil for three whole months to complete just one customized wedding gown that may require over 100 procedures.

“It is our hands that give the dress warmth and texture,” she said. 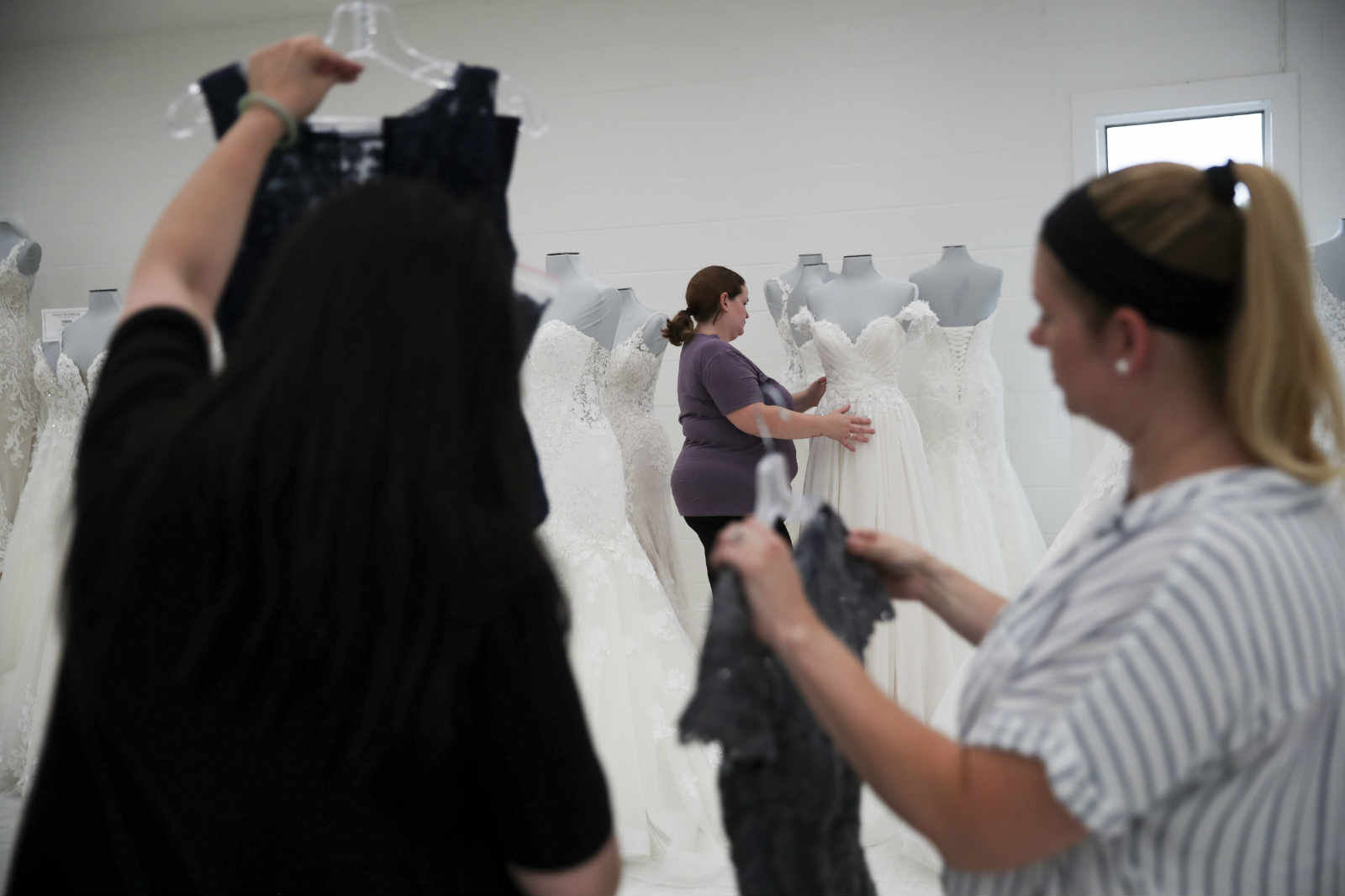 U.S. President Donald Trump tweeted on Aug. 1 that he will place an additional 10 percent tariff on the remaining 300 billion U.S. dollars’ worth of Chinese imports starting on Sept. 1.

Lang has been outspoken against the tariffs. He testified in several public hearings that the tariffs would put his whole industry in danger, threatening the livelihood of thousands of American families.

In a hearing with the United States Trade Representative, Lang, also CEO of U.S. brand Mon Cheri, described how the tariffs would destroy his industry: Cash flow caused by additional tariffs will bankrupt U.S. wedding dress manufacturers who import materials from China. Then the retailers will fail as manufacturers break down. 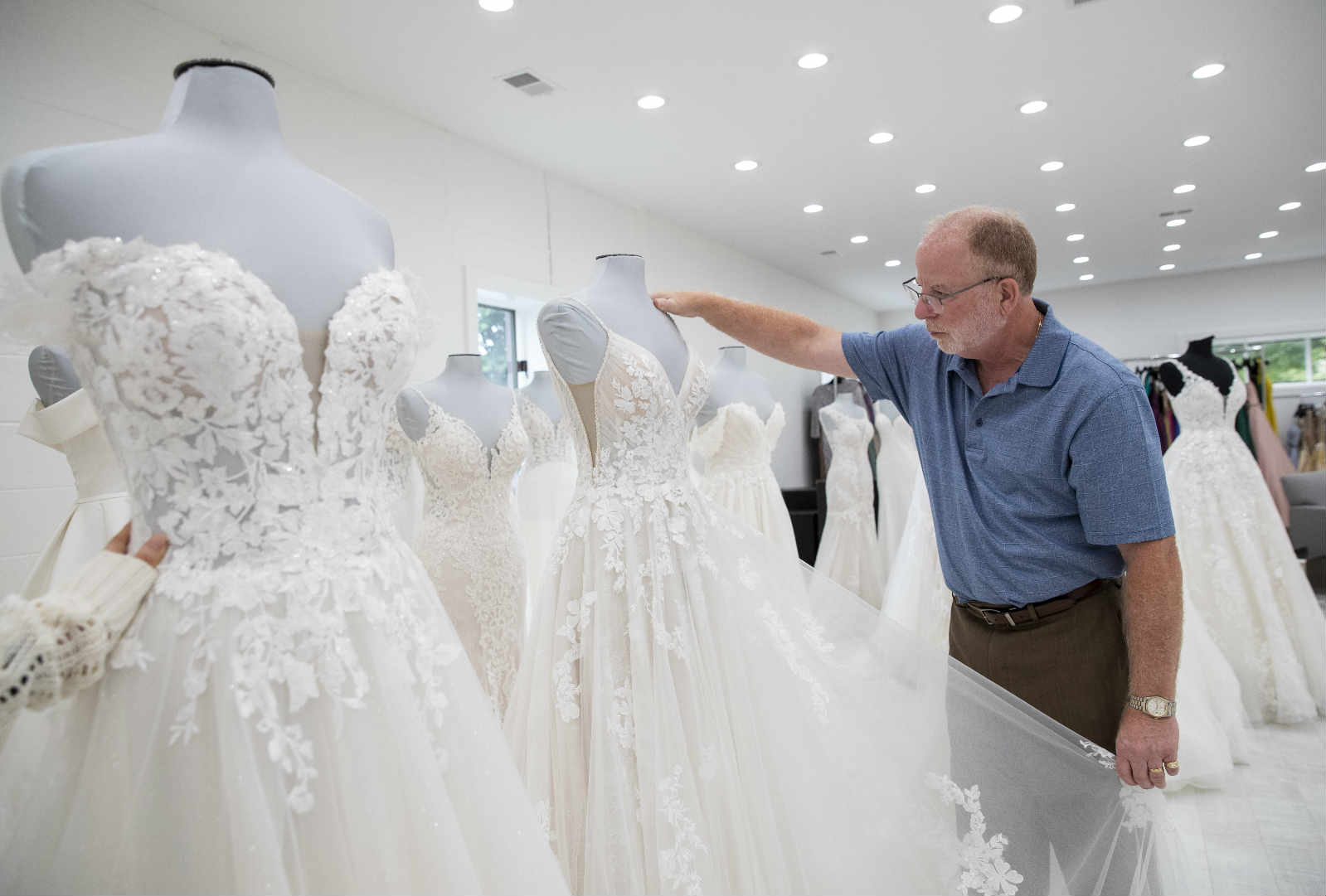 Steve Lang, president of the American Bridal and Prom Industry Association, who is also CEO of U.S. brand Mon Cheri, looks at a bridal dress at his company’s showroom in Trenton of New Jersey, the United States, July 10, 2019. (Xinhua/Wang Ying)

The ultimate consumer will see prices rise dramatically and will have to buy from other countries directly from e-commerce platforms, further undercutting American businesses.

Tariffs will not bring anything back to the United States. Making wedding dresses involves so many fabrics and beads of different types, colors and texture. “None of these materials exist outside China. So it would be a logistical nightmare to move all that production outside China,” Lang said.

“China is a very large factory for the world. You can not just say ‘no more China.’ It’s ineffectual and artificial to assume that you can just walk away from China,” he added.